As the father to young children it is my responsibility to ensure that my wife’s Mother’s Day is a day of celebration. To provide a wonderful, magical experience where she is showered in gifts and relaxation. The aim is to firmly show her how much we as a family appreciate all she does for us. It is the one day a year where Mother’s should be able to sit back, relax and be well and truly pampered. Last year I failed at making the day magical. It was a complete and utter disaster which left the wife feeling unappreciated and let down. You can read how well it went here.

This year I had to step up and get my shit together. The first stage of this was to ensure I did not forget to get a gift. I learnt that gifts are an important part of Mother’s Day and the line ‘don’t get me anything’ is a polite way of saying ‘you better bloody get me something’. I asked the wife what she wanted. A nice nightie she replied. So the hunt began. However not sooner had I started did I receive a message whilst she was out one day saying she had found one and bought it and was going to give it to me to give to her. Kind of takes the magic away a little but at least she was happy with it, she had something she wanted and most importantly she would actually have a gift this year. Winner.

Next task was a card. But again before I had chance to do this, the better half had bought her own card whilst out with Florence and then given these to Florence to hide. That was two tasks sorted. However I knew that I still needed to get her something and to only give her gifts and cards she chose herself would not go down well.
The good folk at Hobbycraft sent me a nice little crafting package to make some Mother’s Day goodies with the kids. And my gosh we had some fun. Hours spent painting, sticking, gluing, colouring generally making a jolly good mess and producing masses of gifts for the Mrs. We made cards, boxes, pictures, many many wonders. We even managed to contain most of the mayhem within the conservatory, except for paint footmarks across the living from carpet. But we created art of the highest quality. You would never know I failed art at GCSE. 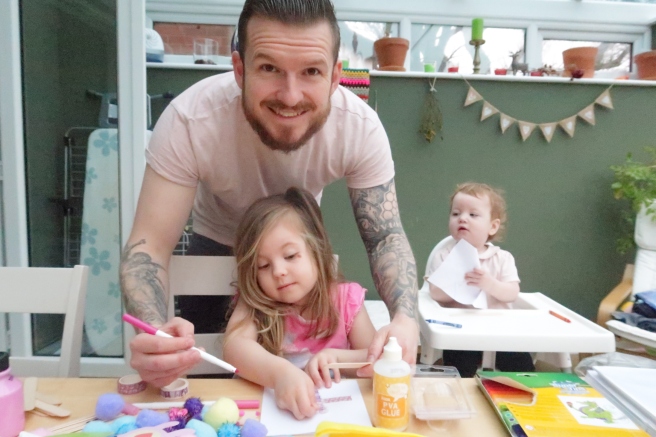 The wife has got giddy for plants lately. Real ones. Fake ones. If it is green and potable she is loving it. Our house has been swarmed by plants. She keeps telling me which ones a real and need watering but then the next minute she moves them all around the house and I forget which plants are real and which are fake. Hard to bloody tell. But they look good. So to add to her little collection, the girls bough her a plant each.

One of the most important lessons I took from last years shenanigans is to book a table well in advance otherwise your snookered. This year I booked us a nice table for 4 at Miller & Carter Steakhouse. Job done.

First thing first. Leave mummy to have a lie in. Tick

Give mummy presents and cards. Tick

Ask mummy what she wants to do for the day. Tick

Do whatever mummy wants to do. Tick

Give mummy time to get ready without interruption and in peace. Failed (hard to stop a 4 year old running up and down the stairs but tried and that surely counts)

Do not argue with mummy on the big day. Failed

Make amends with mummy after the argument by admitting you are an idiot and that you are very sorry. Tick

Go out for a wonderful meal, have an amazing time. Tick

Get home, bath the kids, get them in bed then relax. Tick

Outcome. The wife was happy. Claimed that this year was lobster compared to the tuna I dished up last year. 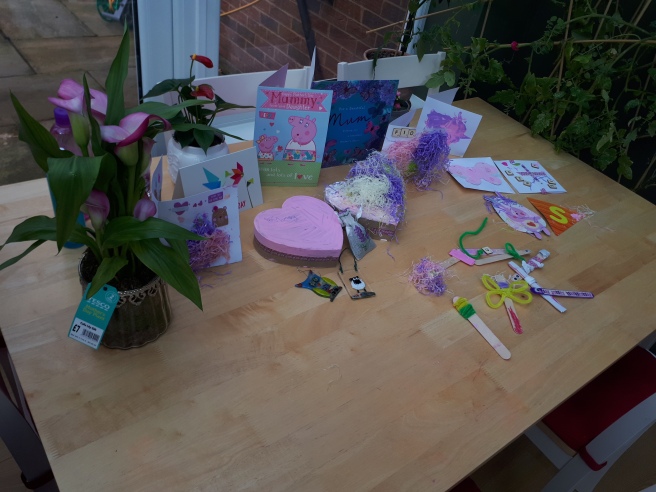 Qualitative run down of the days events

Kids woke up at 6am. Brought them downstairs to give them breakfast. Left the wife in bed. Gave the kids breakfast. Had a coffee. Watched tele. Then cleaned the kitchen. Had another coffee.
Caffeine kicked in. Felt energised. With the help of the kids laid mummy’s presents out. Began to make breakfast in bed. Scrambled tofu on toast. Yum. When it was ready took it to the wife, who had just woke up. She ate it in bed with Flo. Edith and I ate ours downstairs.
After breakfast the wife came downstairs. Opened her presents. She was happy. Told her we were going out for a meal. She seemed pleased.
Played around in the house. The made lunch. Was not great but everyone ate it. Then the wife started to get ready. Asked to be left in peace. Florence did not conform. She was up and down the stairs. Apologised to wife. She accepted.
Already to go out. Dropped pressies off at mothers and mother in laws. In car had argument with the wife. Cannot remember what about. Tension.
Arrived at Miller & Carter. Apologised. Forgiven. Had a lovely meal. Ate lots. Drank lots. Spent lots. Went home.
At home bathed kids. Got them in bed. They went to sleep. We crashed on the couch. Wife happy.
Jobs a gudden. 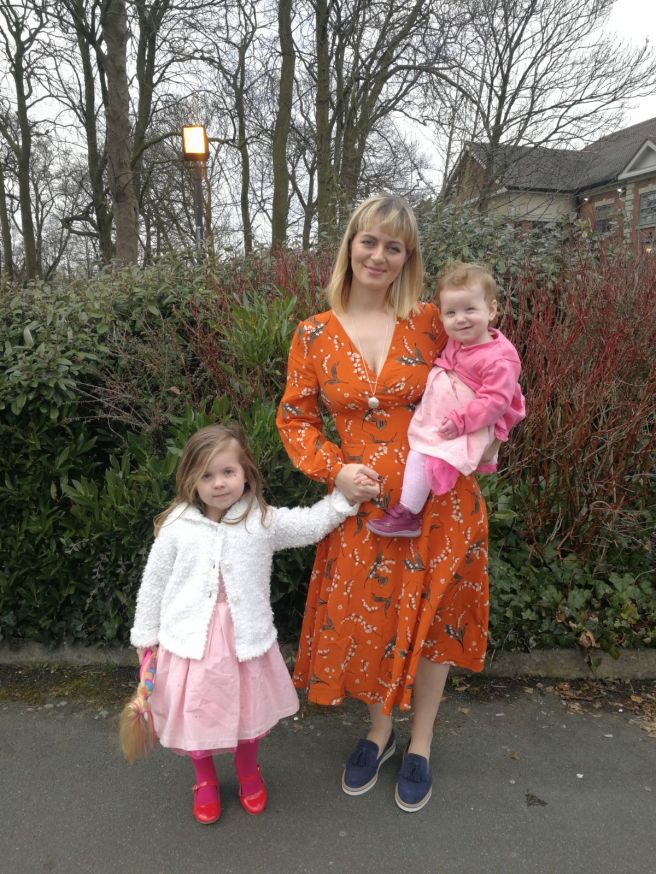